Terrestrial carbon stocks across a gradient of urbanization 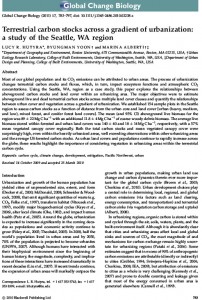 a study of the Seattle, WA region [pdf]

Abstract:
Most of our global population and its CO2 emissions can be attributed to urban areas. The process of urbanization changes terrestrial carbon stocks and fluxes, which, in turn, impact ecosystem functions and atmospheric CO2 concentrations. Using the Seattle, WA, region as a case study, this paper explores the relationships between aboveground carbon stocks and land cover within an urbanizing area. The major objectives were to estimate aboveground live and dead terrestrial carbon stocks across multiple land cover classes and quantify the relationships between urban cover and vegetation across a gradient of urbanization. We established 154 sample plots in the Seattle region to assess carbon stocks as a function of distance from the urban core and land cover [urban (heavy, medium, and low), mixed forest, and conifer forest land covers]. The mean (and 95% CI) aboveground live biomass for the region was 89 _ 22MgCha_1 with an additional 11.8 _ 4MgCha_1 of coarse woody debris biomass. The average live biomass stored within forested and urban land covers was 140 _ 40 and 18 _ 14MgCha_1, respectively, with a 57%
mean vegetated canopy cover regionally. Both the total carbon stocks and mean vegetated canopy cover were surprisingly high, even within the heavily urbanized areas, well exceeding observations within other urbanizing areas and the average US forested carbon stocks. As urban land covers and populations continue to rapidly increase across the globe, these results highlight the importance of considering vegetation in urbanizing areas within the terrestrial carbon cycle.