Effects of mid-twenty-first century climate and land cover change on the hydrology of the Puget Sound basin, Washington

The distributed hydrology–soil–vegetation model (DHSVM) was used to study the potential impacts of projected future land cover and climate change on the hydrology of the Puget Sound basin, Washington, in the mid-twenty-first century. A 60-year climate model output, archived for the Intergovernmental Panel on Climate Change (IPCC) Fourth Assessment Report (AR4), was statistically downscaled and used as input to DHSVM. From the DHSVM output, we extracted multi-decadal averages of seasonal streamflow, annual maximum flow, snow water equivalent (SWE), and evapotranspiration centered around 2030 and 2050. Future land cover was represented by a 2027 projection, which was extended to 2050, and DHSVM was run (with current climate) for these future land cover projections. In general, the climate change signal alone on sub-basin streamflow was evidenced primarily through changes in the timing of winter and spring runoff, and slight increases in the annual runoff. Runoff changes in the uplands were attributable both to climate (increased winter precipitation, less snow) and land cover change (mostly reduced vegetation maturity). The most climatically sensitive parts of the uplands were in areas where the current winter precipitation is in the rain–snow transition zone. Changes in land cover were generally more important than climate change in the lowlands, where a substantial change to more urbanized land use and increased runoff was predicted. Both the annual total and seasonal distribution of freshwater flux to Puget Sound are more sensitive to climate change impacts than to land cover change, primarily because most of the runoff originates in the uplands. Both climate and land cover change slightly increase the annual freshwater flux to Puget Sound. Changes in the seasonal distribution of freshwater flux are mostly related to climate change, and consist of double-digit increases in winter flows and decreases in summer and fall flows. 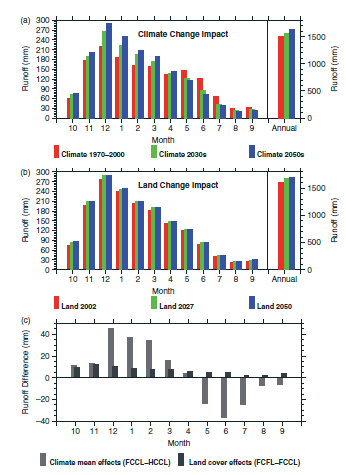 Results: Comparison of the influence of Climate versus Land Cover Change on the hydrology of the Puget Sound Basin, Washington