Humans challenge the phenotypic, genetic, and cultural makeup of species by affecting the fitness landscapes on which they evolve. Recent studies show that cities might play a major role in contemporary evolution by accelerating phenotypic changes in wildlife, including animals, plants, fungi, and other organisms. Many studies of ecoevolutionary change have focused on anthropogenic drivers, but none of these studies has specifically examined the role that urbanization plays in ecoevolution or explicitly examined its mechanisms. This paper presents evidence on the mechanisms linking urban development patterns to rapid evolutionary changes for species that play important functional roles in communities and ecosystems. Through a metaanalysis of experimental and observational studies reporting more than 1,600 phenotypic changes in species across multiple regions, we ask whether we can discriminate an urban signature of phenotypic change beyond the established natural baselines and other anthropogenic signals. We then assess the relative impact of five types of urban disturbances including habitat modifications, biotic interactions, habitat heterogeneity, novel disturbances, and social interactions. Our study shows a clear urban signal; rates of phenotypic change are greater in urbanizing systems compared with natural and nonurban anthropogenic systems. By explicitly linking urban development to traits that affect ecosystem function, we can map potential ecoevolutionary implications of emerging patterns of urban agglomerations and uncover insights for maintaining key ecosystem functions upon which the sustainability of human well-being depends.

Cities across the globe are driving rapid evolutionary changes in plants, animals, fungi, viruses, and other organisms. Organisms can adapt to the urban environment by changing their physiology, morphology, and behaviors. Because these organisms can play important roles in nutrient cycling, pollination, seed dispersal, water and air purification, and food production, any changes in their traits might have significant effects on human well-being. The challenge is to understand the mechanisms of urban-driven evolutionary change and determine whether these changes might affect ecosystem function at the planetary scale. This complex challenge can only be addressed by combining the expertise, data, and analytical methods of evolutionary biologists, ecosystem scientists, ecologists, urban ecologists, palaeoecologists, and archaeologists. A new Research Coordination Network (RCN) will bring together scientists from different institutions to design and perform long-term cross-comparative studies, to synthesize the science, and to explore mechanisms that link urban development patterns to rapid evolution and the potential for those changes to feedback to shape ecosystems. The RCN will train scholars, postdocs, and PhD students, and will recruit members with diverse backgrounds offering them direct experience in collaborative, transdisciplinary research.

The complexity of urban eco-evolutionary dynamics 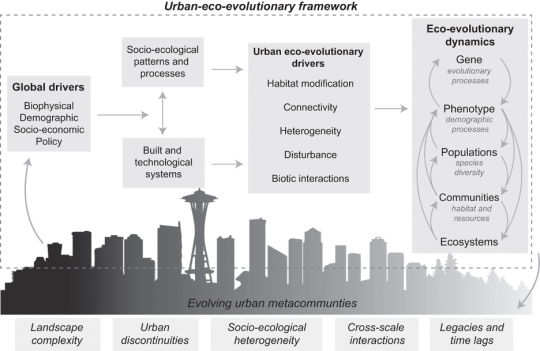 Humans in cities alter the eco-evolutionary play by simultaneously changing both the actors and the stage on which the eco-evolutionary play takes place. Urbanization modifies land surfaces, microclimates, habitat connectivity, ecological networks, food webs, species diversity, and species composition. These environmental changes can lead to changes in phenotypic, genetic, and cultural makeup of wild populations that have important consequences for ecosystem function and the essential services that nature provides to human society, such as nutrient cycling, pollination, seed dispersal, food production, and water and air purification. In the present article, we propose that understanding these dynamics requires rigorous characterization of urbanizing regions as rapidly evolving, tightly coupled human–natural systems. We explore how the emergent properties of urbanization affect eco-evolutionary dynamics across space and time. We identify five key urban drivers of change—habitat modification, connectivity, heterogeneity, novel disturbances, and biotic interactions—and highlight the direct consequences of urbanization-driven eco-evolutionary change for nature’s contributions to people. Then, we explore five emerging complexities—landscape complexity, urban discontinuities, socio-ecological heterogeneity, cross-scale interactions, legacies and time lags—that need to be tackled in future research. We propose that the evolving metacommunity concept provides a powerful framework to study urban eco-evolutionary dynamics. 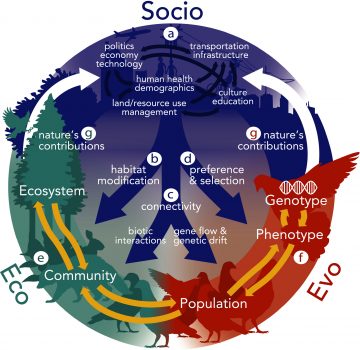 Ecoevolutionary feedbacks on contemporary timescales were hypothesized over half a century ago, but only recently has evidence begun to emerge. The role that human activity plays in such dynamics is still unclear. Through a metaanalysis of >1,600 phenotypic changes in species across regions and ecosystem types, we examine the evidence that the rate of phenotypic change has an urban signature. Our findings indicate greater phenotypic change in urbanizing systems compared with natural and nonurban anthropogenic systems. By explicitly linking urban development to trait changes that might affect ecosystem function, we provide insights into the potential ecoevolutionary implications for maintaining ecosystem function and the sustainability of human well-being.

Eco-­evolutionary dynamics in an urbanizing planet 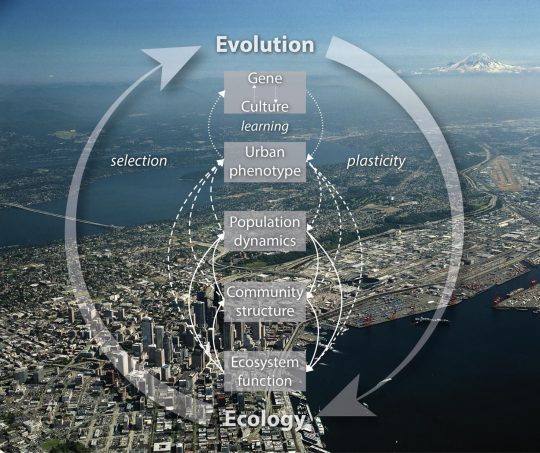 Key human drivers of change (e.g., climate, demographics, economics, and policy) inﬂuence eco-­evolutionary dynamics through interactions between human, natural, and built system components of the urban ecosystem through a series of subtle mechanisms.