Both the Seattle and Phoenix areas face profound challenges in meeting their long-term water needs, including factors such as increasing population, significant agricultural and industrial withdrawals, meeting required minimum stream flows for aquatic species, increasing temperatures and evaporative losses, and, in the case of Seattle, a declining winter snowpack (primary method of water storage for peak summer demands). Understanding the patterns of water consumption in the context of urban growth and climate change will provide important information to inform climate adaption strategies.

Can emergent spatial patterns be identified in the distribution, use, and alteration of water resources in both human and natural systems? Water is a resource that is fundamental and common to all human and natural systems. In human systems, water has many different uses, including consumption, agriculture, industry, and washing, as well as non-use and non-market value. In natural systems, water is a critical regulator of all biogeochemical processes. Both systems require the transportation, allocation, and distribution of water. The presence of water itself also has a significant physical impact on both human and natural landscape patterns through dynamic geomorphological processes. It is therefore likely that emergent spatial patterns in the heterogeneous urban landscape can be identified by the flow of water as a function of human and natural processes. In human systems, the demand for water varies greatly across different development types. Water supply and wastewater infrastructure are critical functions that enable urban development. The cost of providing such infrastructure is expected to depend on the varying demand of alternative development types and their location relative to rural to urban gradients. In natural systems, water quantity, quality, distribution, and flows are fundamental determinants of ecological processes. We are exploring the relationships between water consumption, climate, and patterns of urbanization in the greater Seattle region. 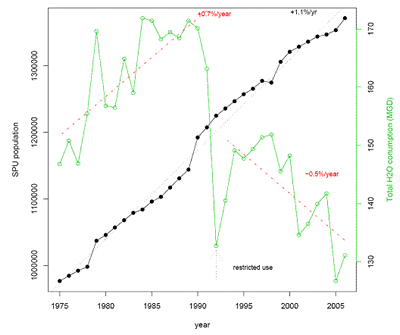 Figure 1: The population served by the Seattle Public Utilities (SPU) has been steadily increasing since the 1970’s at an annual rate of ~ 1.1% year-1. In contrast total water consumption (green line) was increasing by 0.7 % year-1 between 1975 and 1991. After the 1992 drought, and accompanying restriction on water usage, the total water consumption has been decreasing by 0.5% year-1.