Integrating Human and Forest Functions across an Urbanization Gradient

Urban development is dramatically altering ecological functions worldwide, yet we are just beginning to understand the interactions between urbanization patterns and ecosystem processes (Pickett et al. 2001; Grimm et al. 2000; Alberti 1999). McDonnell and Pickett (1990) first proposed an urban gradient paradigm as a framework to investigate ecological variations with urbanization. The theory has since evolved, recognizing that development patterns and impacts on ecological functions do not vary predictably with linear distance from the downtown business district; instead the urban landscape is heterogeneous, with multiple business districts and a variety of land uses and development patterns (Yu and Ng 2007; Alberti et al. 2001; Medley et al. 1995). To explicitly represent the complexity of the urban gradient, I will investigate the impacts of urban patterns on forest functions by combining socioeconomic and land use data from the Seattle metropolitan region. My research goal is to characterize how indicators of forest functions change across a gradient of urbanization. My hypothesis is that non-linear variations in the spatial patterns of forest functions across a complex urbanization gradient can be explained by socioeconomic and development patterns. The research questions I plan to address are:

What is the relative contribution of biophysical factors (i.e. elevation, climate) and human factors (i.e. housing density, amount of impervious areas) that explain the variability in forest functions across the urbanization gradient?

Do spatial thresholds exist where forest function indicators show dramatic change across space due to alternative coupled human-ecological system interactions?  If so, at what scale do they emerge? 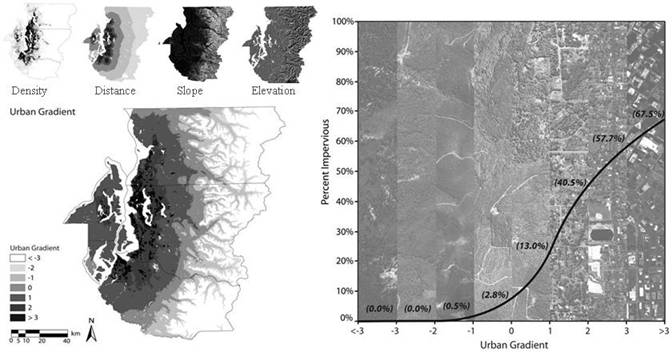 A.) The Puget Sound Urban-to-rural gradient was classified based on population density, distance from urban core, and slope; B.) Relationship with percent impervious land area and urban gradient value shows a strong positive relationship; C.) Proportional distribution of land use also changes significantly along the urban gradient.